It keeps going on with wins: Blue Soave (K. Belluteau) in Bordeaux for the second year in a row in the Prix Jean Cruse, Crazy des Aigles (F. Chappet) in Saint Cloud and Aubenas (A. Gilibert) in Lyon Parilly.

Win too for Bullish Bear (B. Van Dalfsen) in Maisons-Lafitte, and then Amiral (A. Gilibert) in Deauville. 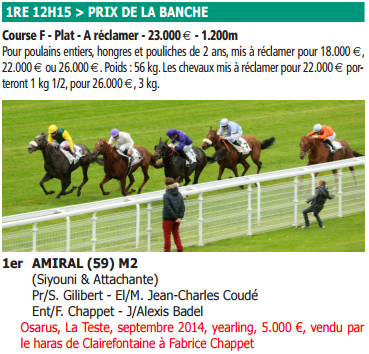 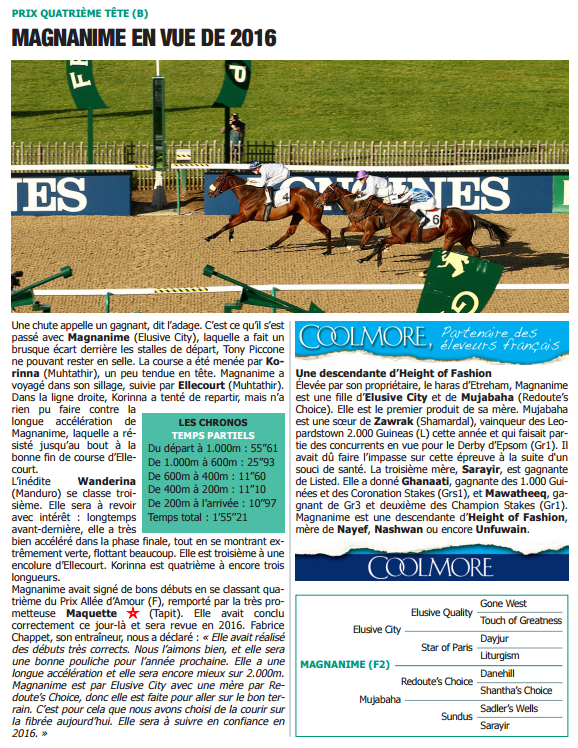 We should not miss either the nice second place of La Berma (Ecurie JL Bouchard) in the Group III Prix du Pin in September.
Posted on 23 Dec 2015 by Fabrice Chappet
2016 new generation full of promises

To start with, six yearlings at the Arqana sales in Deauville last August:

among them, an attractive bay colt from Irish Vintage by Kendargent, 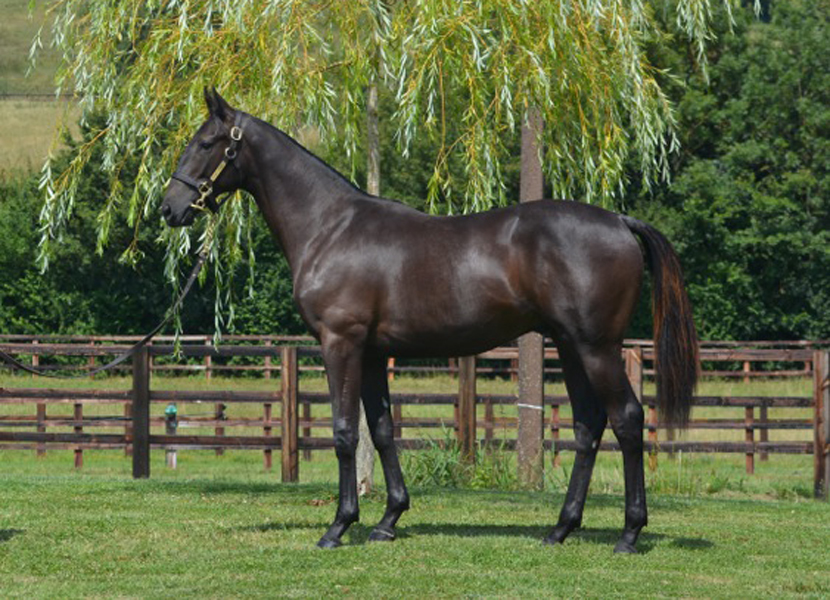 and a pleasant bay colt from Lindsey's Wish by Myboycharlie.

American Master a bay colt from Maitresse by Amercian Post,

and La Testerine a nice bay filly from Mishkina by Deportivo.

It continues in October with two fillies at Goffs sales in Ireland and three fillies and colts at Tattersalls sales in England.

And last but no least, nine yearlings at the Arqana October sales in Deauville:

and a beautifull colt from Indiana Wells by Excelebration. 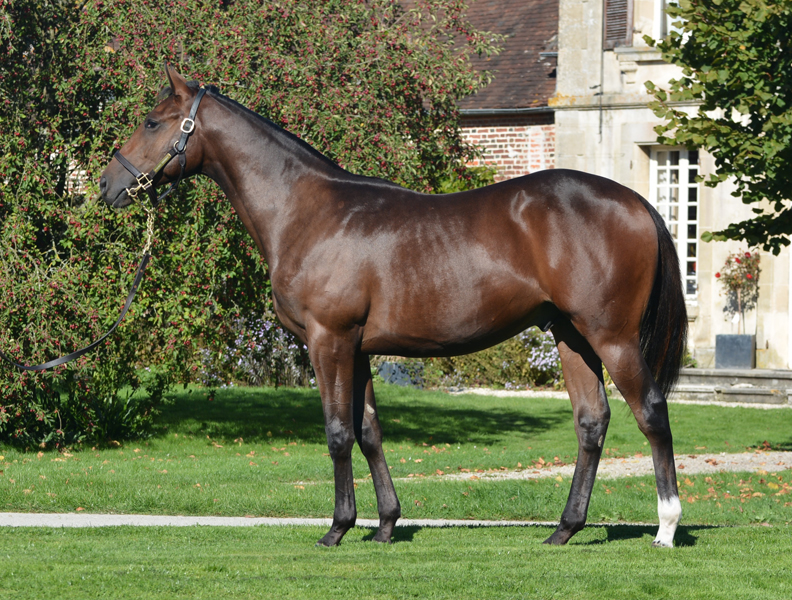 Watch them at work on the link below:

Fabrice Chappet stable boarders performed really well in August with  an amount (earn and French premium’s combined) near €160.000, which allows the stable to exceed  €1.000.000 gains for the first part of the year.

4 victories and a good 2nd place in an international race, the month was huge.

Wootton’s Walk (Wooton Basset) took her first victory in Vichy in a race over 1000 meters. A Montmartre (Montmartre), for her part, keeps doing well and won in Clairefontaine in the Prix Argument.
Pitou (Canford Cliffs) did also well with her two victories in E races in Deauville. The filly won twice in a row with a good manner. New Outlook (Awesome Again) won the Prix Hôtel Barrière le Normandy Deauville in the last days of the famous festival.

Secret Existence (Sakhee’s Secret) did well for her first time out with a second place in the Prix de la Reboursière in Deauville.

The good results of Mocklershill (Siyouni), Filly Green (Diamond Green) and Secly (Marju) deserve to be mentioned as well. Indeed, all of them finished second in races in Deauville and Clairefontaine. Forza Libranno (Dick Turpin) is improving and did third for his second time out in Vichy. It is the same with Amiral (Siyouni) in the Prix Etalon Le Havre.

Chappet stable boarders’ should continue their improvements during the next weeks. 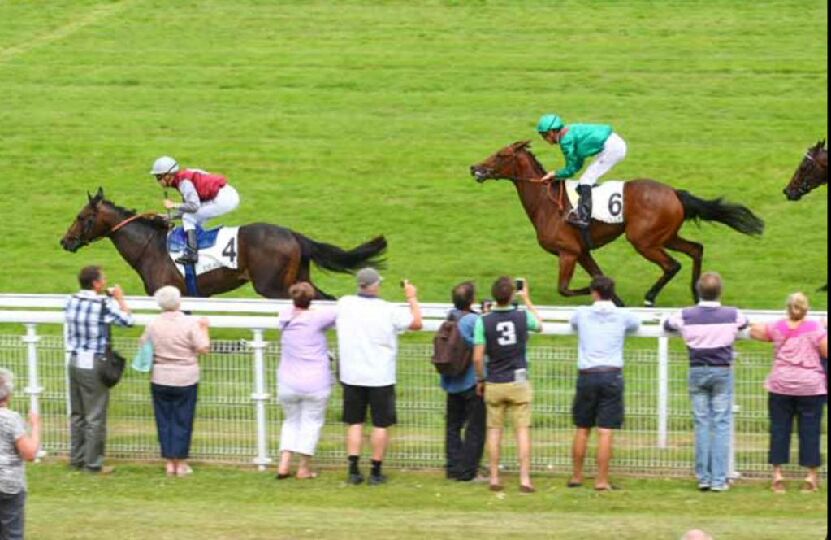 A very convincing start for Money Maker who won the first race of his career in a Listed race for 2 years old beginners in Deauville. The colt from American Post and Noozah Canarias’ brother very well performed by finishing first of his race in 58 seconds and 40 hundredth. After missing his start, he came quickly on the inside and then came off the pack at 400 hundred meters from the post, taking the advantage on Katoma (Siyouni). His trainer Fabrice Chappet, which has already won this race last year with Mocklershill (Siyouni) said “the horse always worked very well. He is, for now a true speed horse but he does everything so well. He is well born as well”. His jockey Christian Demuro also reveals that this is a horse with potential and good burst of speed. The colt seems to have the mental for racing and should keep going to do well in the future. There are two options now for Money Maker, there can be an entries in the Prix de Robert Papin, group II race at Maisons-Laffitte the 26th of July or in the Prix Cabourg, Group III race at Deauville the 2nd of August.

To watch the race :youtu.be/b4xhmUZ-B3Q

The trainer stands out at some level since the beginning of 2015.

If his reputation is already done, his results prove he is really part of the best. Indeed, the French trainer is 10th in the top flat trainer ranking with a total amount near 500 000€ and he did with only 55 horses in training.

With 39 horses and 87 victory and places, he is the 1st trainer with more than 40 different runners. In this way, he proves that professionalism and rigor are very important to him.

What a beautiful prize list for Fabrice Chappet and his 2yo in 2014. Indeed, he finished second in the 2yo trainers ranking just behind the famous Christiane Head-Maarek. Fabrice Chappet and his 2yo, it is: more than 450 000€ earn (prize money and French-Bred premiums combined), around 30 000€ of earnings per horse, 60 runners for 10 victories and 27 places. La Berma’s (Lawman), Finsbury Square’s (Siyouni) or Crazy des Aigles’ (Deportivo) trainer let the biggest, as Jean Claude Rouget and Freddy Head behind him.

After a very good 2014’s season, Fabrice Chappet keeps proving his qualities as a trainer in 2015 being 10th in the top ranking of French trainers.

Fabrice Chappet stable boarders outperformed in May with  an amount (earn and French premium’s combined) near €275.000 thanks to 3 victories and 27 places!

La Berma (Lawman) recorded an easy win in the listed race Prix du Pont-Neuf in Longchamp. And then a great 2nd place in the Prix de Sandringham Group II in Chantilly.

Filly Green (Diamond Green) scored at Maisons-Laffitte in the Prix du Vésinet in 1’11”70. After two months without convincing results, the filly made the difference in this race over the distance of 1200 meters. Early leader, then in the inside pack, Filly Green took the advantage on her 17 rivals. She finished her race easily, winning by one and a half length in front of Mtsamboro (Country Reel) who defended until the pole. With the odds-on at 10/1, she was not favorite but finished well with a good turn of foot in the straight.

Already placed at Listed and Group 3 level as a juvenile, the smart filly La Berma (Lawman) stepped up to the status of Listed winner this year, following an impressive performance in the 7-furlong Prix du Pont-Neuf at Longchamp. The daughter of Lawman, whose only below-par performance came on her seasonal in the Gr.3 Prix Imprudence when she was ridden from the rear, relaxed in front under Ioritz Mendizabal and quickened sharply at the top of the long straight to score by 6 lengths in 1’24”15. The second, third and fourth home were all Listed winners at two.

For her next assignment, she was stretched to a mile for the first time in the Group 3 Prix de Royaumont, which attracted a very competitive field at Chantilly on Prix du Jockey Club day. Ridden prominently once again, the dark brown filly handled the trip perfectly and was only beaten in the dying strides by the Wertheimer colour-bearer Impassable. Night Of Light (Famille Niarchos / Pascal Bary) and Mexican Gold (Prince Khalid Abdullah / André Fabre), both Group winners going into the race, ran third and fourth respectively.

Fabrice Chappet’s stable boarders realized a good month in April. With more than 100 000€ of earnings (prize money and French-Bred premiums combined) and horses placed in good races, the boarders maintain their results.

Finsbury Square (Siyouni) did well, finishing second of the Gr III Prix Sigy at Chantilly. The two winners in April are Crazy des Aigles (Deportivo) and Casquito (Blue Canari). They respectively won the Prix de Vignemont at Compiègne and a G race at Maisons-Laffitte over 2100 metres. Casquito had a good month, he was also second at Compiègne and third at Maisons-Laffitte in good races. Secly (Marju) and New Outlook (Awesome again) realized good performances in D races at Longchamp, both being placed over 1600 and 1950 meters. Blue Soave (Soave) and Sinfionetta (Sinndar) didn’t run bad neither. They took two second places at Fontainebleau and Longchamp.

Once again, Fabrice Chappet and his boarders are proving to us that the stable is in good form, and allow the trainer to stay in the top of the ranking of the French trainers.