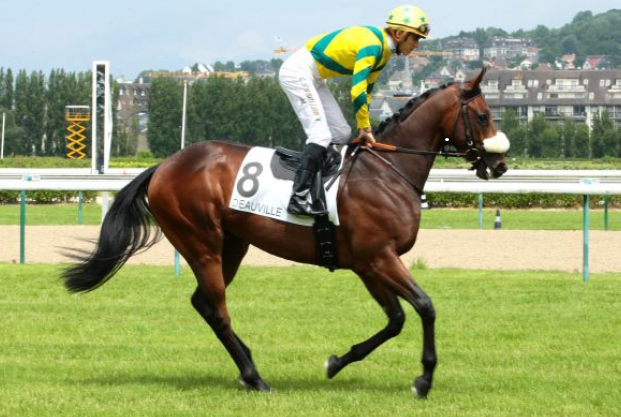 The filly Precieuse (A-M. Hayes - Tamayuz) gives Fabrice Chappet its first classical victory winning the Group 1 Poule d'Essai des Pouliches in Deauville. Come in at two-year-old to the stable, the filly quitely moved through the ranks.

Posted on 11 Jul 2017 by Fabrice Chappet
A flying start

This contiues with Uni (Haras d'Etreham - More than ready) and Ucel (A.Gilibert - Kyllachy) winning their maiden in Deauville.

It is then Chiverny (E. Loungar - Whipper) who gets, during Cagne-sur-Mer's meeting, his third consecutive victory before winning again in a class A race part of the "Défi du Galop" at La Teste.

Aubenas (A. Gilibert - Siyouni) also wins at Cagne-sur-Mer and will confirm its good shape with two second places in Chantilly.

Roc Angel (A. Gilibert - Rock of Gibraltar) is victorious in Deauville after a second place in Chantilly.

New Outlook (G.Barbarin - Awesome Again) still in good shape, get the fourth Quinté of his career at Cagne-sur-Mer's meeting.

Forilie (J.Odermatt - Martillo) always regular, wins two times in a raw for her come-back in Compiègne.

Last but not least Blue Soave (K.Belluteau - Soave) takes the second place in the Listed Prix Cor de Chasse for its come-back in Fontainebleau.

This is how mid February Fabrice Chappet takes the lead in the rankings of french flat racing trainers with the largest earnings by individual runner ! 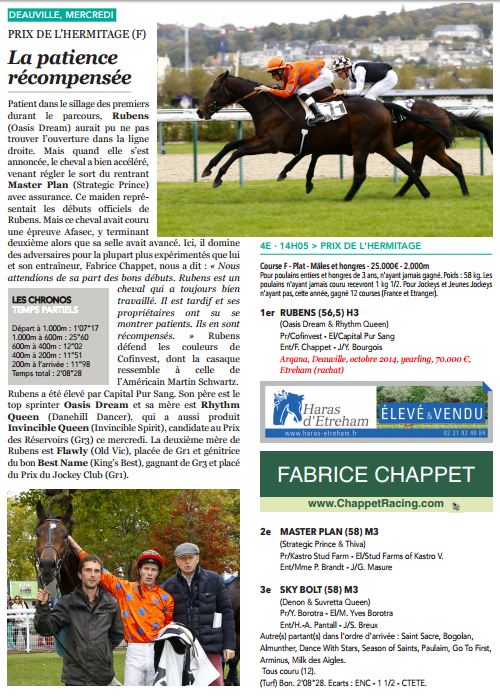 Blue Soave (K.Belluteau - Soave) returns to the winner circle in a B race in Cholet.

Second wins in a row for La Courbette (JL.Bouchard - Le Havre) in Angers who will then leave for the United-States.

For her debuts and in three races only Précieuse (AM.Hayes - Tamayuz) finishes twice runner-up in Listed in Maisons-Laffitte where she easily came back from the rearguard and in Chantilly where she showed a nice final effort too. In this last race Prix Yacowlef she was the only filly trained in France among the first five.

To conclude this fruitful year Chiverny (E.Loungar - Whipper) wins Quinté in Cagnes-Sur-Mer before confirming again in Bordeaux just after and as easily. 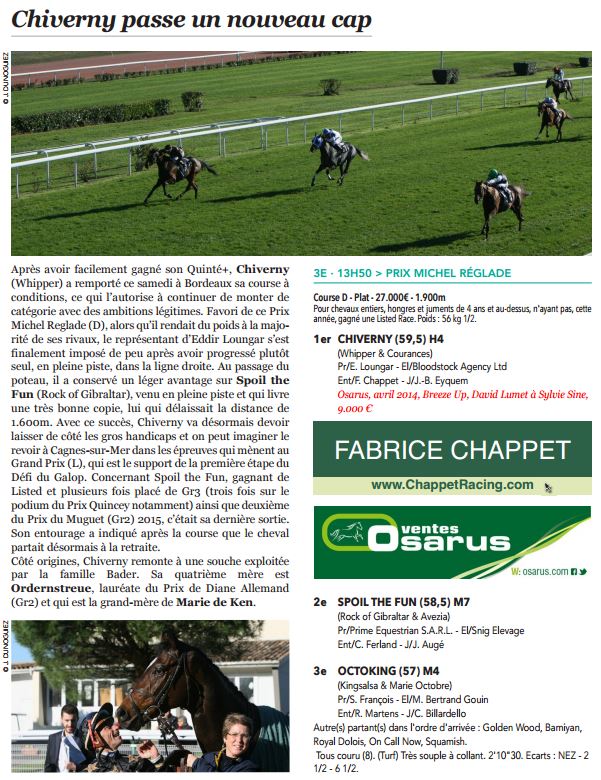 Good premises for 2017, more than 40 yearlings arrived at the stable to start their learning...

Last number in the starting gate was not quite an advantage. He run very well : the first French horse in the race. Sprinters age nicely. This bodes well for the remainder of his career.

As every year in August part of Fabrice Chappet stable boarders left Chantilly for Deauville for the famours meeting.

Regarding the yearling, we have to notice Ivory Choice (Haras du Mâ / F.Chappet - Choisir) that confirm her talent with a second place in the Prix de la Vallée d’Auge (Listed) in Deauville.

She has a very good finish and is beaten only by a well confirmed filly.

Other boarders followed the trend :

Barbarigo (S.Gilibert - Canford Cliffs) claimed one month before, takes a 3rd place before winning, all in Deauville.

Once again in 2016 Fabrice Chappet's stable showed very good potential with its 2-year-olds.

It started with Spiaggia 's win (Antoinette Kavanagh - Spectacular Show) for its first attempt in Chantilly. 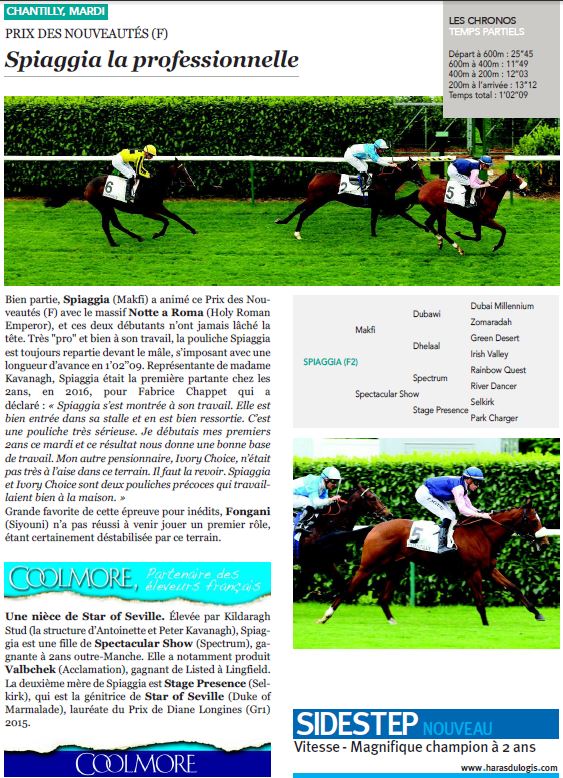 Ivory Choice (Haras du Mâ - Choisir) will take the 4th place in this race in debut.

Therefore he will keep progressing until he wins in Deauville and get the 3rd place in a Listed in Vichy thus becoming black type.

It is then Phoceen 's turn (Haras de la Gousserie - Myboycharlie) to win in Vichy after two 4th places.

Do not forget promissing starts for Paisible et Sage (Al Kuwari - Sageburg) 4th and 5th in Clairefontaine and Deauville, 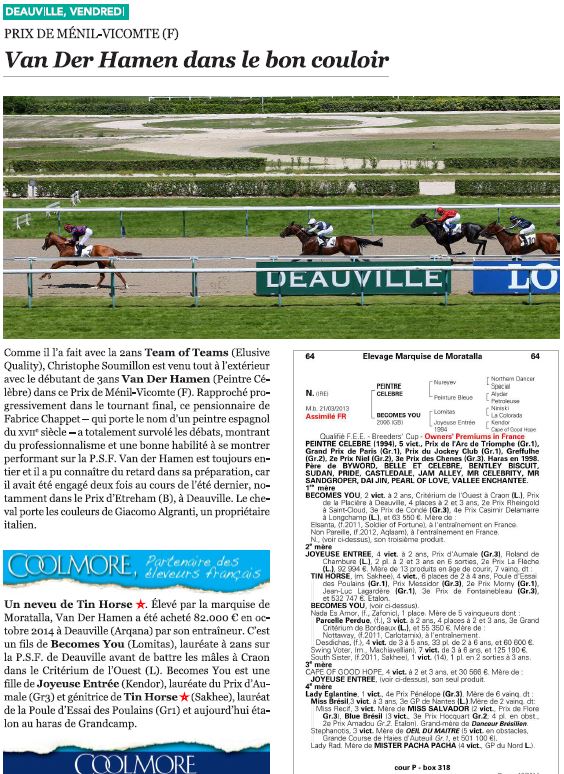 Fabrice Chappet’s stablefoarm totalize 278 000 bonus and gains during the first quarter with 8 wins and 28 places.

We will keep in mind the performance of Magnanime (Haras Etreham - Elusive City), "beautiful filly who does no have any false note in her career for the moment".

After a courageous second place in Cagnes-sur-Mer in California Price (Listed) for its comeback, she scored in Chantilly in Prix Finland (Listed). 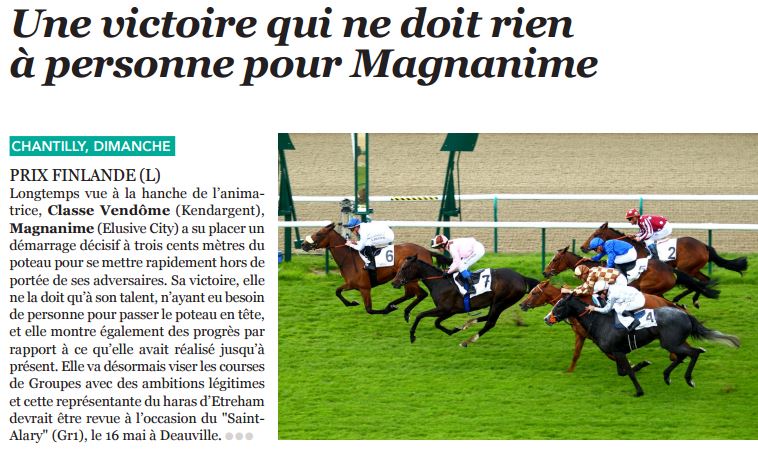 Money Maker is to be followed (Racing Club Meridian / M.Watt - Amercian Post) fourth in the Prix de Sigy (Gr III) in Chantilly and winner of Prix de la Ville Impériale (A race) in Fontainebleau for its comeback. 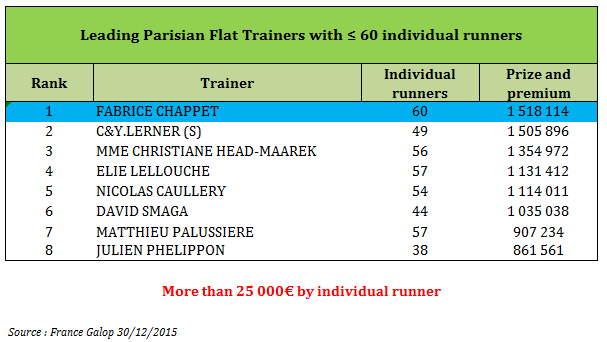